In 2006 at the age of 27 and approx. 3 months after the birth of my son I begin to feel tired, very short of breath, heart palpatations, and the sensation of fluid in my lungs. I went to the doctor and saw the Nurse Practitioner, I told her my symptom's and she told me to drink more fluids and not to sleep on my back she also informed me that if a develop a cough to return. Well, I did just that and for about a month it helped some then I began to cough and the other symptom's had gotten worse. I did my own research and found that it could be Postpartum Cardiomyopathy, and went back to see the my regular doctor and described to him in great detail of my symptom's. He said that I was too young, but suspected something because he rolled in the EKG and took readings of my heart. Not good, and he was worried enough to contact another office personally to have an chest X-rays done immediately, with same day results. The X-rays revealed a dilated heart, so he jumped on the phone again and called a Cardiologist and ask if he could see me right away. I did the blood work, stress test, and had a 3d ultrasound done on my heart. Results, PPCM with a ejection rate of 35%. The cardiologist strongly suggested that I do not have anymore children. Which for me that was hard to hear because I am the only child, especially since I planned to have 3 children. I was prescribed coreg (Beta-blocker), altace (Ace-Inhibitor) and lasik (diuretic). I had so much fluid in my body that I lost 18lbs in a week after taking the meds(water pill). Wow! Well I did eventually get better and by May of 2007 my EF(Ejection Fraction) had increased to 55% which was determined after having a transesophageal echocardiogram (TEE). I worked on strengthing my body by walking 6 miles on the weekends. My ultimate goal was to have another baby perhaps a baby girl. In 2008 I weaned off the meds, and discussed having another baby with my cardiologist. She advised me that there was a small percentage that I would relapse, and if I were to get pregnant I would automatically be considered high risk and monitored very close. She gave me hope, and brightened a previously wounded heart.
Posted by Skinny Wrap Lifestyle at 7:20 AM

Skinny Wrap Lifestyle
Florida, United States
A mother and wife,survivor of postpartum cardiomyopathy, and Independent Distributor for It Works. If your looking to change your body or decrease your debt visit my website www.SkinnyWrapLifestyle.com

Alkalize your body, lose weight, safely increase your energy, and restore your health... 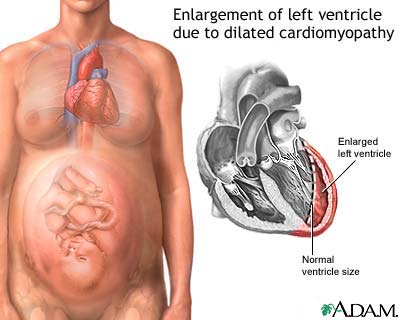 Enlargedment of LV due to dilated cardiomyopathy